Located only 64 Kms from Bhavnagar, the park has the highest concentration of blackbuck in the world. The only tropical grassland in India to be given the status of a national park, Velavadar is a 36 kms patch of savannah-type scrubby grassland well suited to the requirements of these lovely animals. The park is set between two rivers, a few miles from the Gulf of Cambay sea coast. The rich soil is believed to have its origins in the sea.

The principal attraction is the massive population of blackbuck, the handsome Indian antelope whose formerly widespread wild population has decreased drastically over the last century and fragmented into various pockets. The blackbuck is endemic to India and is rated among the most elegant antelopes and one of the fastest animals over a long distance. During the rule of the Maharajahs of Bhavnagar, Velavadar was harvested for grass to feed the royal cattle herds and the antelope were protected except for the occasional hunting camp.

Early March is the rutting period when one can witness mating contests between rival males. This is the time in the blackbuck year when the males establish their dominance over the harems of females and many skirmishes occur as the younger bucks seek to displace the older animals and claim their right to reproduce.

A few wolves also occur at Velavadar but the reserve exists mainly as a showcase for the blackbuck: they are definitely the star attraction here.

Other mammals seen in Velavadar are fox, jackal, jungle cat, wild pig, hare and various other rodents. The birdlife is extensive. Sandgrouse, larks and other grassland species are seen in fair numbers, and the harrier roost at Velavadar is one of the largest in the world. 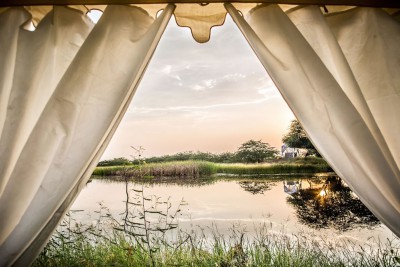