A former capital of Guatemala, Antigua was founded by the Spanish in 1543 and grew to become the finest city in all Central America. It was carved up by various Catholic monastic denominations such as Jesuits, Capuchins and Merceds, each with its own fine church and specific area of control.

Following a series of minor earthquakes, a major one in 1773 led to widespread destruction and abandonment for a new capital, Guatemala City. Today there are numerous picturesque ruins to be seen among the many well-restored colonial buildings which survived the quakes.

Neglect followed until the late 20th century when the architectural and historical value of what remained was finally realised. Since 1972, renovation has continued apace and now the city is the top tourism site in the country, a thriving, popular metropolis settled by many wealthy locals and foreigners. There are numerous restaurants, bars, galleries and monuments, as well as fine colonial hotels and leafy plazas.

Antigua is surrounded by volcanoes, one of which is active (appropriately called Fuego). Climbing the volcanoes is one activity on offer for visitors, but should be attempted only if fully equipped and guided. 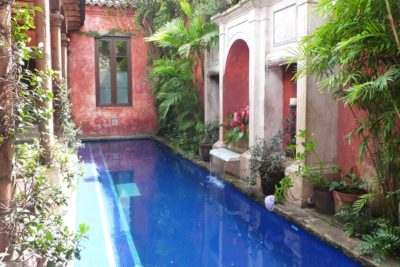