Located 400km southeast of Addis Ababa, the Bale Mountains National Park contains a spectacularly diverse landscape containing high altitude moorlands, rugged peaks, lush cloud forest, tumbling mountain streams and rolling grasslands. The afro-montane Sanetti Plateau in the Park rises to over 4,000m in altitude and includes the highest peak in the Southern Ethiopia highlands, Mount Tullu Dimtu. This wild and windswept plateau features numerous glacial lakes and swamps and is surrounded by higher volcanic ridges and peaks. The southern slopes of the Park are covered by the lush and largely unexplored Harenna Forest. The Bale Mountains National Park is perhaps the ultimate destination in Ethiopia for wildlife watchers, birders, nature enthusiasts and hikers due to its fantastic diversity of flora and fauna and breath-taking landscapes.

Visitors can also explore this park, one of the highest in Africa, on foot, vehicle and also by horseback and besides enjoying the wildlife also learn how honey and the local wild coffee is harvested by the communities.

The Afro-alpine Sanetti Plateau is the most unusual of the park’s habitats and is only made accessible by the highest all weather road in Africa. This rocky moorland environment with its rushing boulder strewn highland streams and bogs could almost resemble the Highlands of Scotland, if it was not for the giant lobelias and kniphofia (red hot poker) and numerous giant mole rats. This almost moon like landscape is the domain of the beautiful Ethiopian wolf and as many 120 – 180 of these critically endangered canids can be found here. Despite their rarity, they are surprisingly easy to observe as they conveniently hunt the abundant and endemic mole rats during the middle of the day and out in the open.

The plateau actually supports one of the highest densities of rodents in Africa and this abundant food source attracts many birds of prey in addition to the raptors. Other high altitude avian specialities here include the blue-winged goose, wattled ibis, spot-breasted lapwing, rouget’s and Ethiopian black –headed siskin. Lower down lush forests of juniper-hagenia produce a wonderful moss and lichen rich habitat for the elegant mountain nyala and secretive Abyssinian long-eared owl. While lower still, the boggy Gaysay Grasslands at the northern entrance to the park attract herds of warthog, bohor reedbuck and olive baboons as well as the occasional serval.

Bale’s most intriguing habitat of all though is perhaps its misty Harenna Forest on the southern slopes. This huge area of mostly primary forest supports a tremendous biodiversity and many new species to science have even been discovered here in recent years. The dense forest hides Menelik’s bushbucks, giant forest hogs, bushpigs and even a rare population of Abyssinian black-maned lions. The Bale monkey, an endemic relative of the vervet monkey has evolved to feed on the abundant bamboo within the Forest and is found nowhere else on earth. There is also outstanding birdlife to be seen here with white-cheeked turacos, Abyssinian catbirds, African emerald cuckoos, crowned eagles and Abyssinian orioles in addition to many localised reptiles (including the Bale two-horned chameleon), amphibians and butterflies.

The Bale Mountains is also one of the few locations in the world where truly wild coffee plants can still be found growing in remote shaded corners of the Harenna Forest. This National Park really is a treasure to Ethiopia. 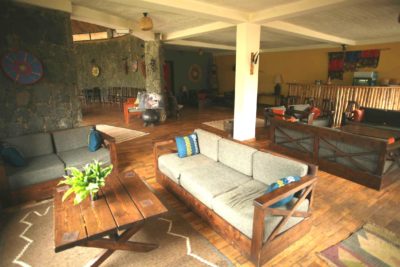