Long a favourite of international yachtsmen and local boat owners alike, the beautiful Rio Dulce runs from the Spanish colonial fort of San Felipe at the mouth of Lake Izabal to the Caribbean Sea at Livingston. A short distance from the fort is the town of Fronteras, linked to the town of El Relleno by the largest bridge in Guatemala. For a couple of miles eastwards there are a number of marinas and small hotels, then the river transforms into a long narrow lake called El Golfete. From there the river narrows into a spectacular six mile-long gorge, rising to 300 feet in places and covered in trees, before finally reaching the sea.

The Rio Dulce ends at Livingston, a town first settled by the Garifuna, descendants of escaped African slaves and Carib Amerindians who fled the island of St Vincent after persecution by the British. They eventually settled much of the northeast coast of Central America: Garifuna communities can be found from Belize (Dangriga, Hopkins and Punta Gorda) all the way through Honduras’ Miskito Coast down to southern Nicaragua at Bluefields. Not surprisingly, Livingston has a far more Caribbean feel than the rest of Guatemala, with a laid back atmosphere and a special cuisine all its own using fish and coconut in delicious ways.

On the other side of the river from Livingston is Puerto Barrios, Guatemala’s main Atlantic seaport.

There is good birdwatching to be found along the Rio Dulce, both water birds and forest species, and many migrants visit the area.

Livingston makes a convenient departure point for Punta Gorda in Belize, which can be reached by private water taxi in an hour or so. 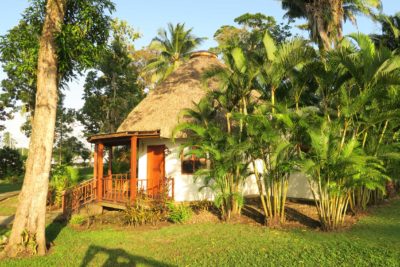 Eastern Guatemala
One of the best located properties on the Rio Dulce...
View Accommodation
This site uses cookies: Find out more.