The Selinda Spillway is a shallow channel connecting the northern Okavango Delta to the Linyanti and Chobe River systems. Since 2006 and during years of high water, the spillway flows (usually from May to October), connecting the delta and Linyanti areas. If the annual flood is particularly high on one side or the other, the channel can flow either to or from the Okavango Delta. When water levels are low the spillway can dry up completely, leaving the channel better enjoyed for walking safaris than water activities.

The spillway differs from the more open Selinda area further east because of its thick riverine woodland and mopane forests. Due to the dense mopane cover, game viewing can be more challenging; however the area is perfect for more active safaris such as walking, which is still possible during green season (November to March) at your guides’ discretion. The spillway gives the impression of being situated on a river rather than in the open floodplains of the Okavango Delta; however the reeds and water lilies that characterise the Okavango Delta are present here too.

The birding in this area is very rewarding with over 130 different bird species to spot. Small groups of buffalo can be found amongst the mopane woods, with bigger herds often spotted moving down the spillway. The area contains the rare roan antelope and, although shy, leopard, hyena, lions and wild dog are present around the spillway. Breeding herds of elephant and solitary bulls are most commonly spotted as they browse the mopane forests and take advantage of the water in the Selinda Spillway for bathing and drinking. 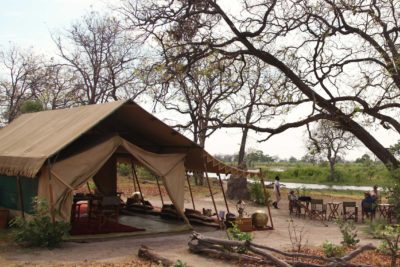 Botswana Northern Botswana
Poised in a remote, treasured location on the famous Selinda Spillway, under can...
View Accommodation 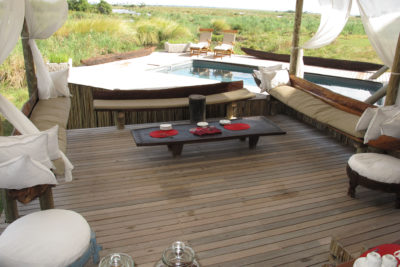