Spotlight on Mandrare River Camp and the Spiny Forest 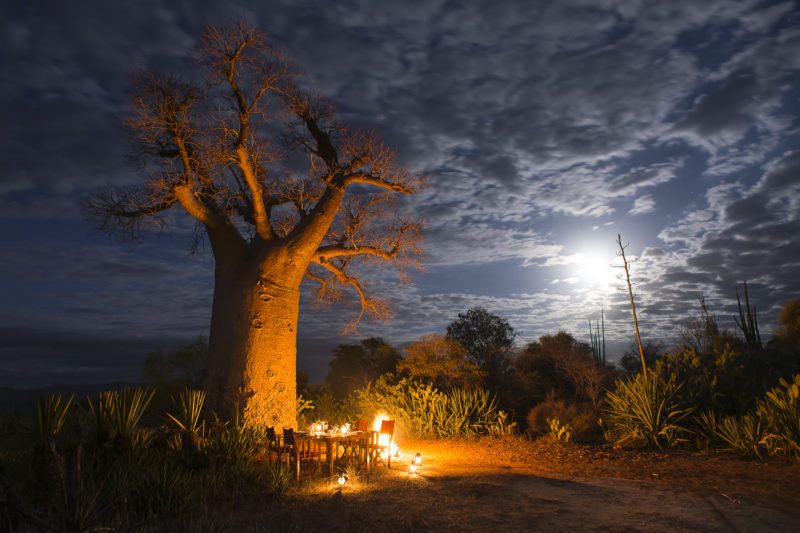 The moon pierces the clouds before a spot of outdoor dining under the splendor of one of the many Didiereacae trees of the Spiny forest.   |   Photography by Reef & Rainforest unless stated otherwise
Written By Ian Loyd
Published 14th August 2017

Inspired by the African style of luxury tented safari camping, the Mandrare River Camp, in southern Madagascar offers some of the most comfortable accommodation in the country and also a base to explore the truly unique spiny forest ecosystem.

Located on the banks of the Mandrare River (roughly 4 hours driving from the town of Fort Dauphin or accessible by a short charter flight), the camp is situated amongst galley forest in the grounds of an old colonial sisal plantation house. Accommodation is within a large traditional African-style safari tent, with a veranda and two canvas safari chairs and a small table. The spacious tents house super comfy 4 poster beds and seating. While to the rear of the tent is a solid-built bathroom section with a spacious solar heated shower area, toilet and washstand with basin.

There is also a swimming pool and comfortable main building and dining area where delicious meals are wonderfully prepared and presented and all variety of drinks including all alcoholic drinks – except champagne are available to guests at all times. As wonderful as the accommodation and service is at the lodge, it’s the access to the unique spiny forest that makes a stay here so memorable. 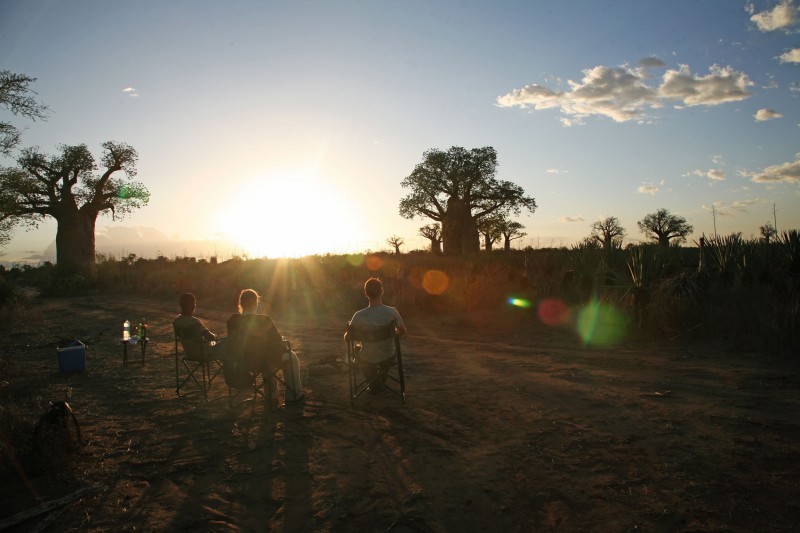 The strange spiny forest (or spiny desert as it is also known) ecosystem here is among the oldest forest types on the planet having evolved hundreds of millions of years ago to cope with the arid conditions that it still faces today. The forest has the highest percentage of endemic plants for any habitat in Madagascar and is dominated by the distinctive thorny Didiereacae or octopus trees. These thorny plants which occupy their own unique family, occurring nowhere else on  the planet. Upon first appearance, these spiky plants look similar to the cacti of the Americas, but are actually completely unrelated making them a textbook example of convergent evolution (the process where two organisms adapt similarly to deal with the same environmental conditions but are not genetically related). The spiny forest ecosystem has formed to survive within an extreme rainshadow formed by moutains to the east which has resulted in a harsh arid environment where droughts occur for much of the year so the wildlife here has had to adapt. 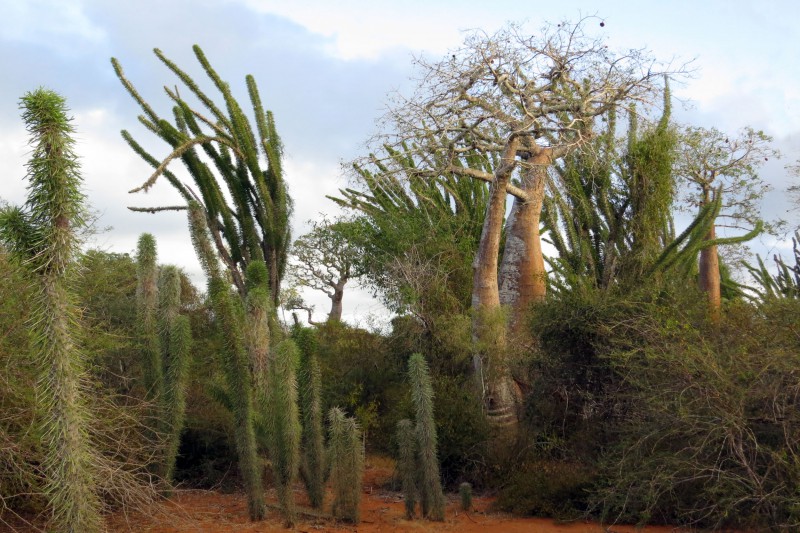 One of the most famous inhabitants is the beautiful Verreaux’s sifaka, which finds moisture by eating the succulent leaves of the octopus trees. The local guides at the lodge are experts and locatinf these inquistive lemurs and as there has been no hunting of wildlife here, the lemurs are very approachable. They can leap up to 9 meters from tree to tree including between the thorny Didiereacae seemingly without injuring themselves. However sometimes they cross larger gaps in the forest at which point it is possible to witness and photograph their characteristic crab-like dancing along the ground between the patches of forest. 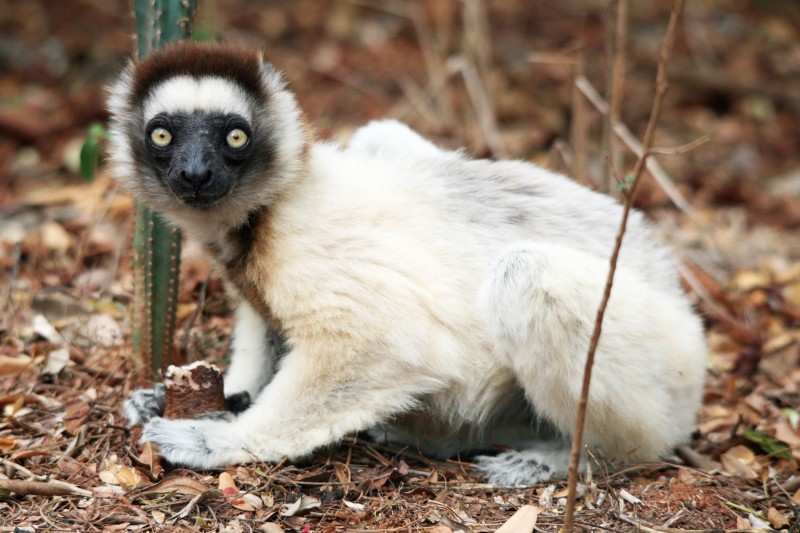 At night three species of nocturnal lemur emerge including two species; the grey-brown mouse lemur and white-footed sportive lemur which are endemic to this habitat alone. Another key species to look for is the radiated tortoise, which is sadly very rare in most other parts of its range, but is still  found in good numbers in the protected forests here. 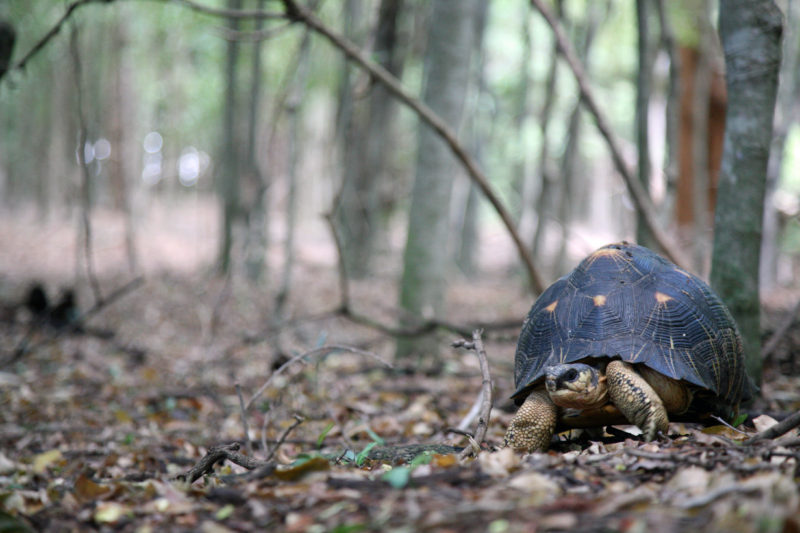 There are also warty chameleons, Dumeril’s ground boa constrictors, hog-nosed snakes, burrowing frogs and fish-scaled geckos which can shed their skin to avoid predation if under attack. The birdlife is also interesting with species adapted and restricted to the arid environment such as the running and giant couas and subdesert brush warbler. While other frequent sightings on early morning walks include the improbable sickle-billed vanga, Madagascar scops an white-browed owls, Madagascar harrier hawk and Humblot’s heron along the river. 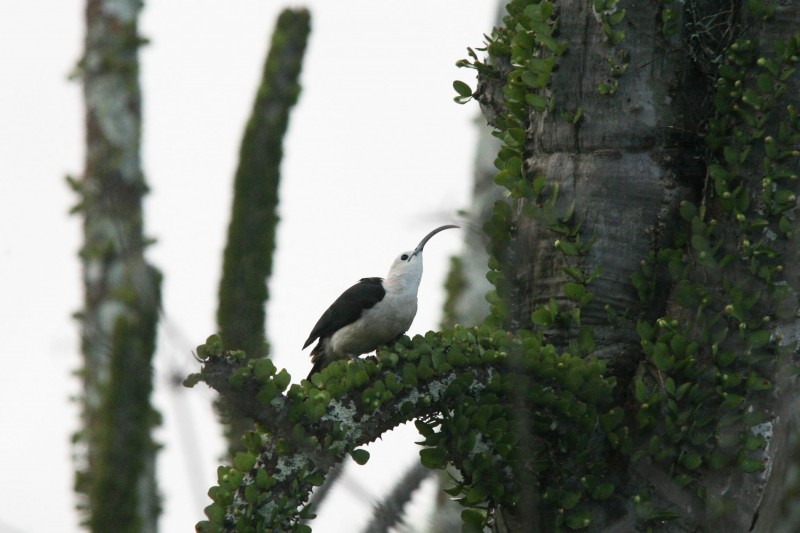 Along the banks of the Mandrare River there are also patches of gallery forest dominated by tamarind trees which support a different range of species including the iconic ring-tailed lemur. The ring-tails here travel in huge family groups and also allow close approach. 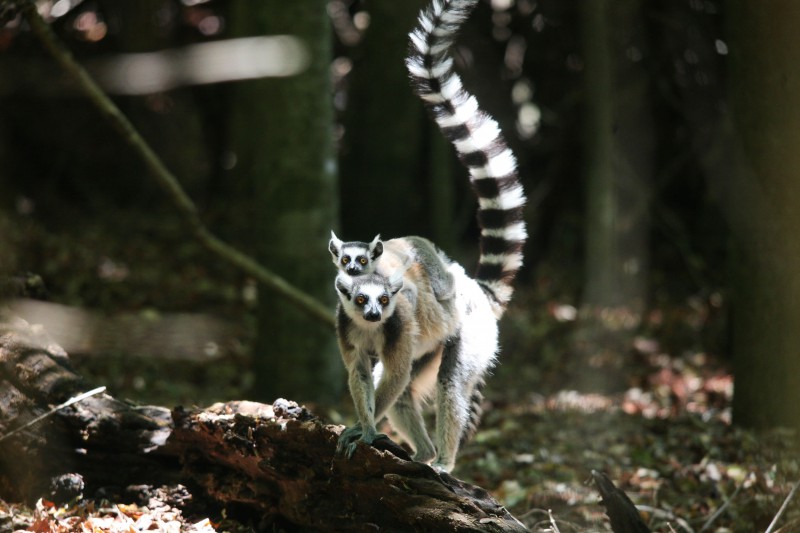 However it’s not just the wildlife experiences here that  are so special. The area is also home to the Antandroy tribe, regarded by some as the fiercest and most traditional tribe in Madagascar. The tribe are largely unaffected by the outside world, holding onto their strong beliefs and living very naturally. The forest and associated wildlife of the area has also been preserved by the people themselves who hold them sacred as resting places for their ancestors. Many of the wildlife watching excursions from the lodge visit forests preserved by these people, where alongside viewing wildlife there is plenty of opportunity to learn more about their traditions and strong beliefs. 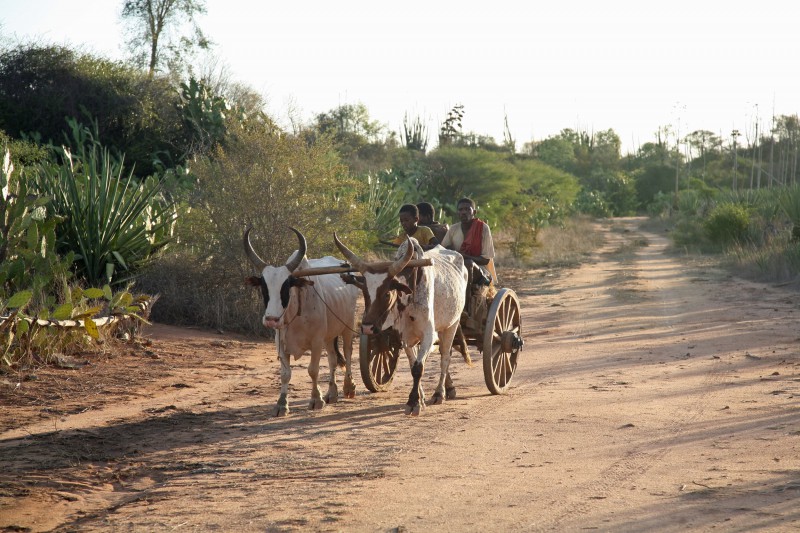 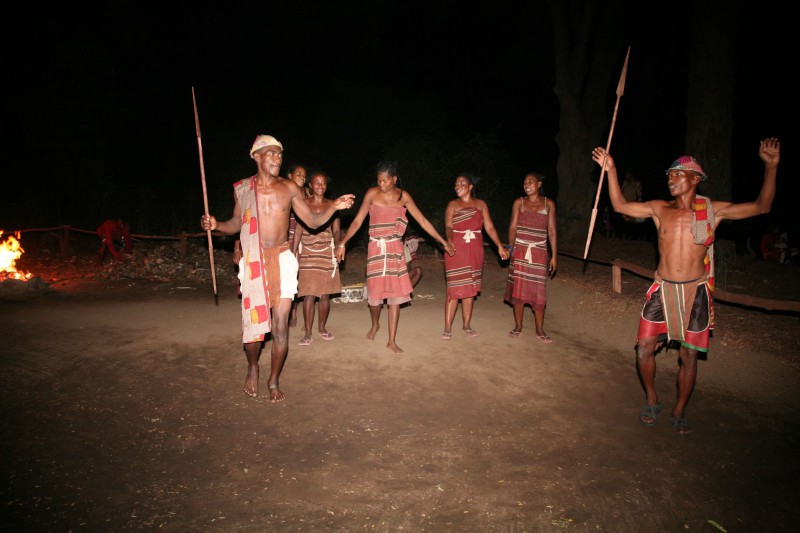 The lodge has a close connection to the local community, providing employment and also help to fund the development of a school in the nearest village. The attentive staff and guides at the lodge always try to customise each guests experience around their personal interests and special experiences such as candle-lit dinners under the stars by the river and sundowners amongst the baobabs are regular features. The relaxed pace and quality of the activities here really sets the lodge apart an makes it one of the best options for exploring Madagascar’s wildlife in comfort.

The camp is featured in the following sample itinerary: Madagascar in Romantic Luxury