Trip Report: Ethiopian Wolves on the Roof of Africa

Trip Report: Ethiopian Wolves on the Roof of Africa

Reef and Rainforest’s Ian Loyd shares his highlights from his recent trip to Ethiopia.

This was my first visit to Ethiopia, a country that is not well known as a safari destination and one that many people will still associate with famine. However, Ethiopia is so full of wonder that it should be on everyone’s travel list. With its unique and often human tolerant wildlife, friendly people, jaw dropping mountain scenery and both ancient and modern history, Ethiopia has so much to offer. 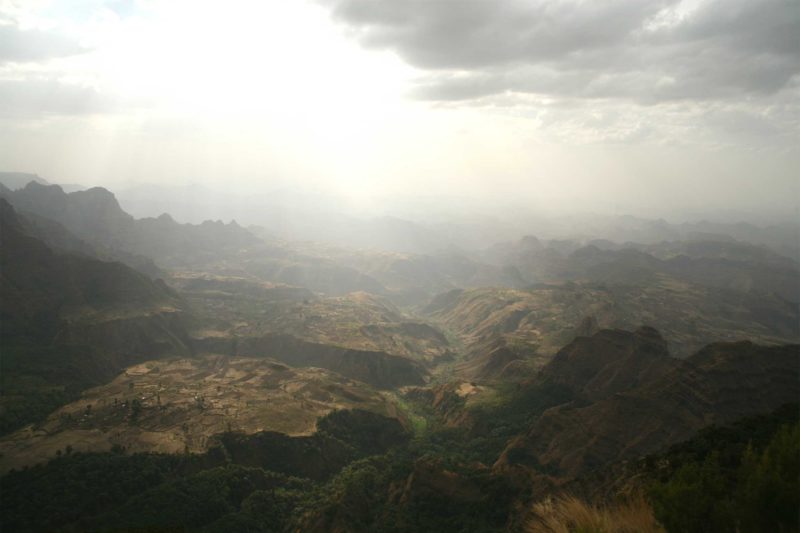 My trip was an exploratory one that took me first to one of the most dramatic mountain ranges in all of Africa; The Simiens. Known as the roof of Africa, the Simien Mountains offer literally breath-taking scenery, they are of course at an altitude of around 3,500 meters above sea level. These jagged and sheer mountains are the result of an ancient volcanic uprising and are famed for their impressive scenery and trekking.

The Simien’s most celebrated animal though is the gelada or bleeding-heart baboon. For me, the gelada must be the most expressive primate I have ever encountered. The male geladas have incredible long faces with striking eyebrows and sport hairy, lion-like manes, powerful canines and bright red breasts. Despite their size and their canines, geladas are completely vegetarian and in the Simiens quite happy to go about their daily business alongside humans. Geladas form huge 200 plus herds that are made up of numerous smaller units, usually each ruled by a single dominant male. 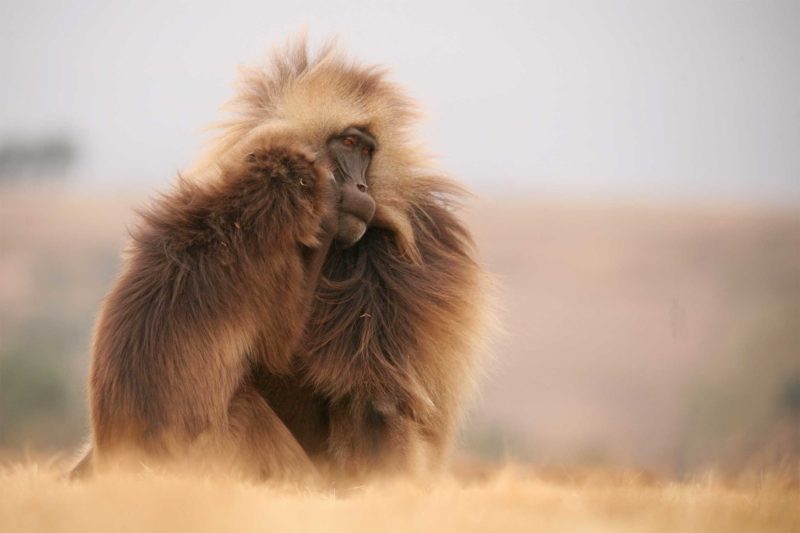 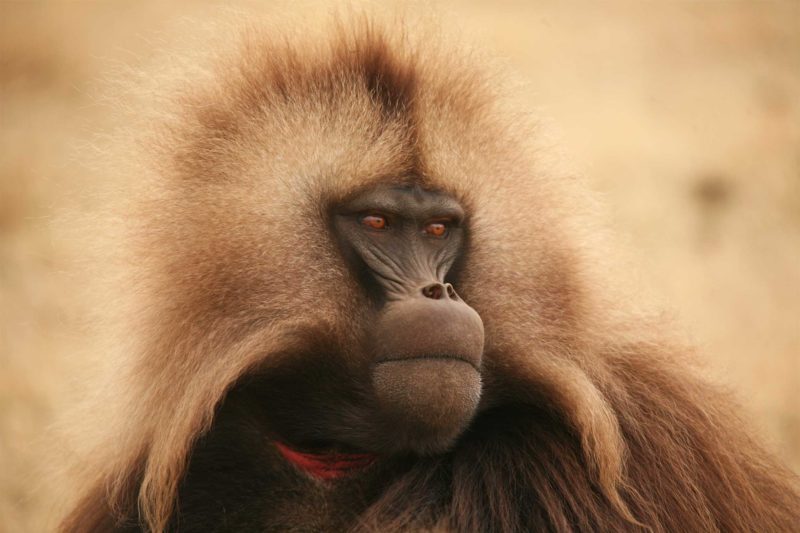 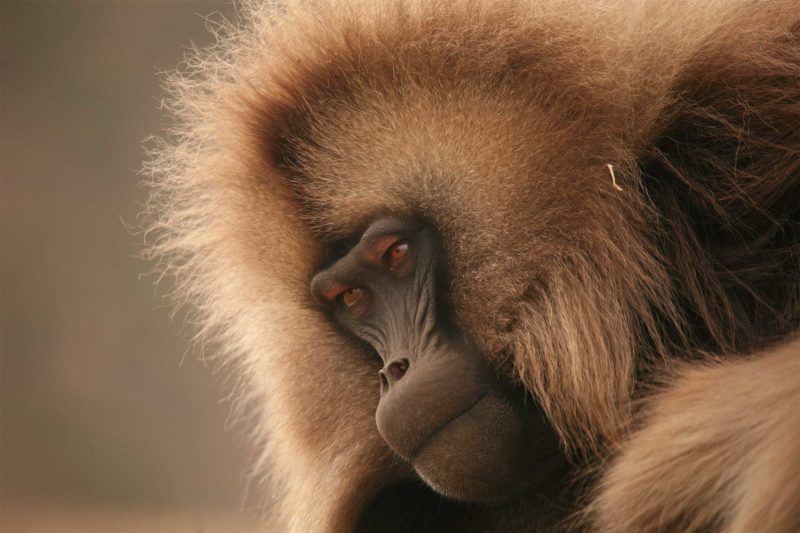 The best way to observe these fascinating primates is to see which direction the herd is moving and then place yourself ahead of where they are likely to be feeding next. By sitting still, you can soon feel part of the herd, unfazed by your presence, the geladas will continue with their daily business, enabling you to observe a wealth of fascinating behaviour and interactions.

My next location was a non-wildlife related highlight as I visited the ancient rock-hewn and monolithic churches of Lalibela. The twelve churches carved out the side of volcanic rock by hand is impressive, but the fact that this was all done in the 12th Century makes these New Jerusalem churches an exceptional archaeological feat. 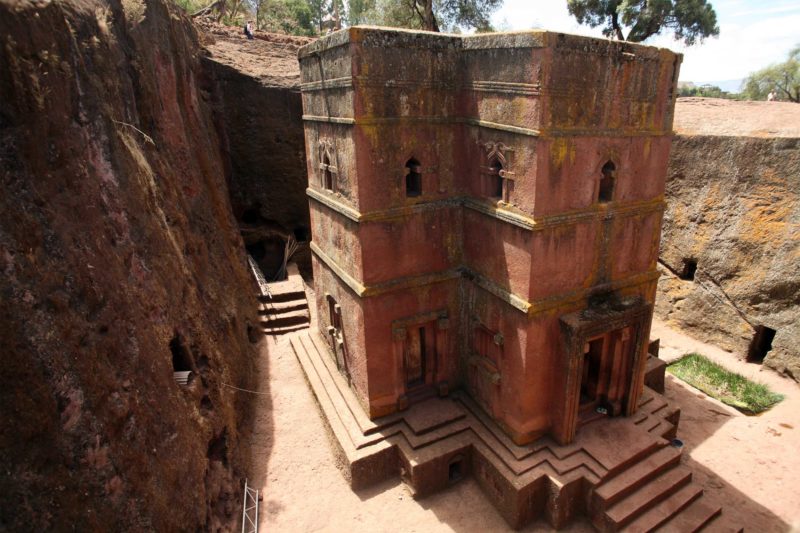 (St George’s Church in Lalibela, one of the most impressive rock carved churches – Ian Loyd)

My next destination felt much more like East Africa, with grassy savannahs studded with acacia trees and nomadic tribes and ostriches appearing and then disappearing in the heat haze. This was the Awash National Park and its nearby Ali-Deghe Plains where herds of Besia oryx and Soemmerring’s gazelle rub shoulders with Grevy’s zebras and gerenuks and where northern carmine bee-eaters ride on the backs of massive Arabian and kori bustards. 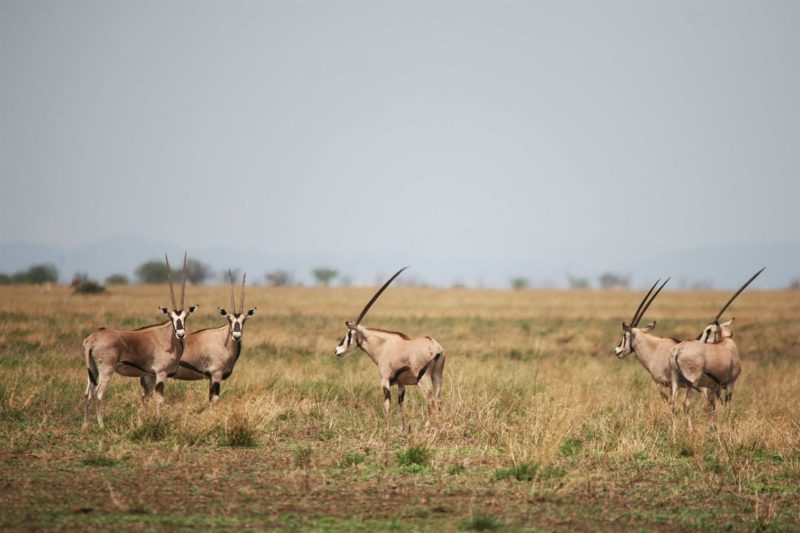 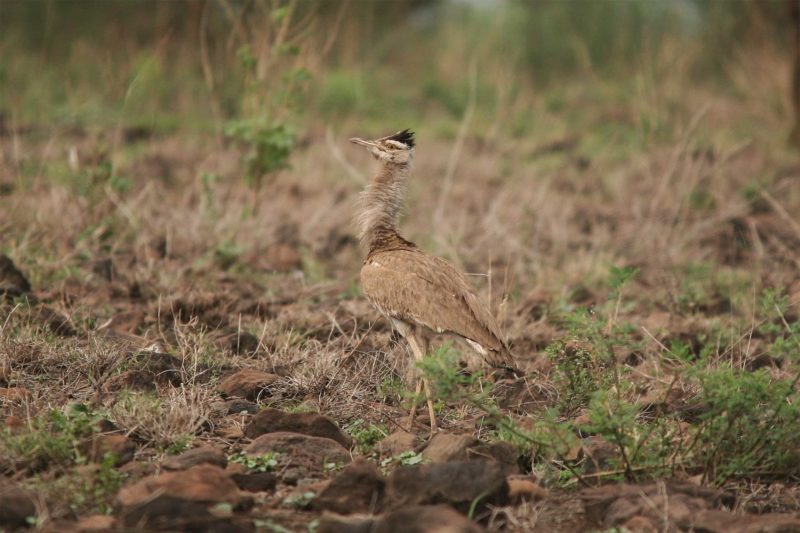 One of my favourite experiences while in Awash though was sitting on a hill watching spotted hyenas emerging from a huge cave in the foreground, while an iconic African sunset was happening in background. This very much felt like the Africa I know. 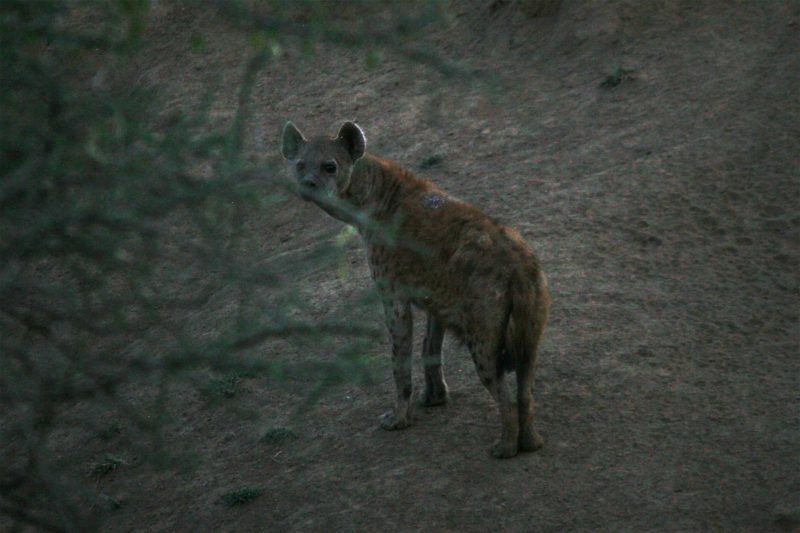 Moving south from Awash, the Bale Mountains felt like a completely different country with their bubbling trout filled mountain streams, windswept mountain plateaus and dripping green cloud forests. The Bale Mountains made me feel like I was in Scotland’s Cairngorms, Dartmoor’s moorlands or Ecuador’s Andean foothills more than I was in Africa. 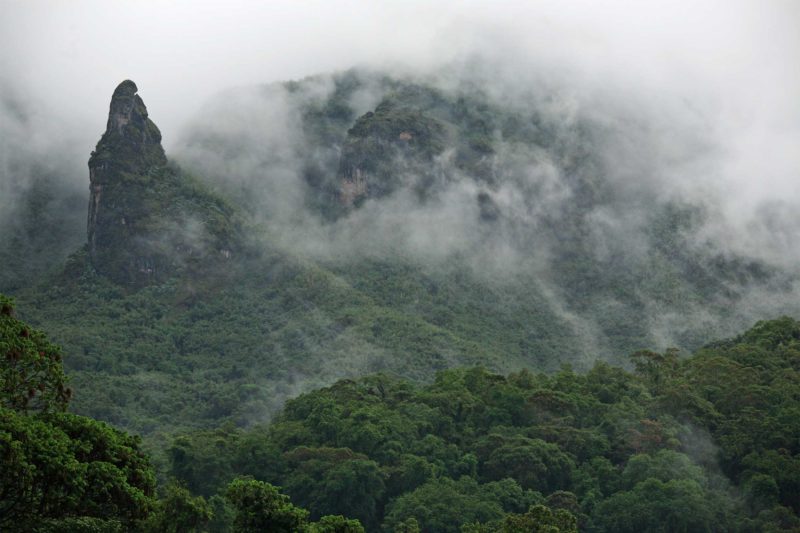 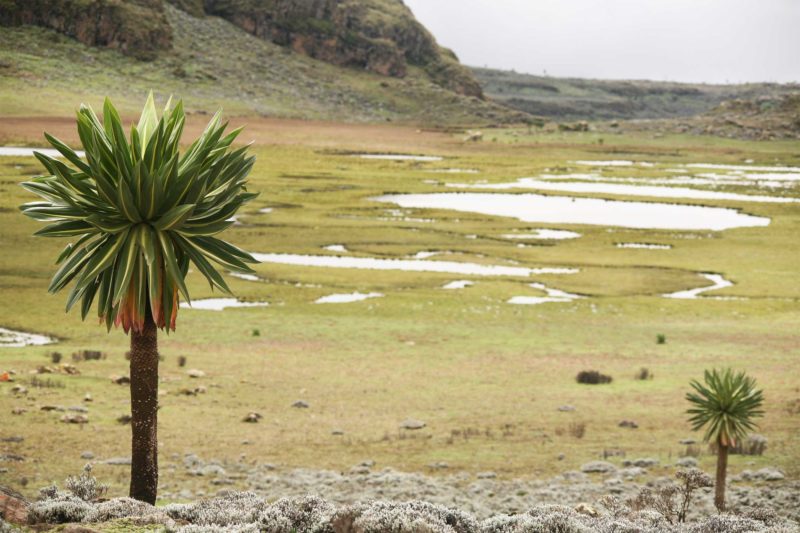 My accommodation here was the wonderful Bale Mountain Lodge, Ethiopia’s premier wildlife lodge, located deep in the little explored Harenna Forest. The lodge offers visitors to this remote region a comfortable base from which to explore one of Africa top biodiversity hotspots. 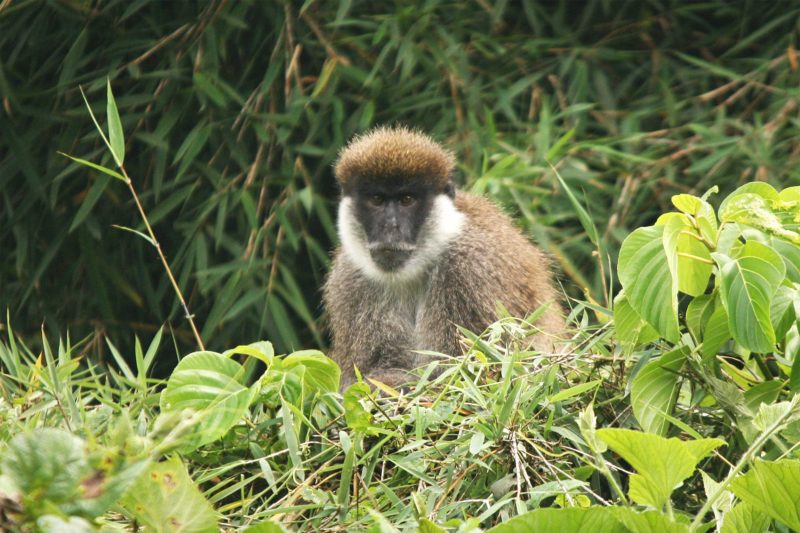 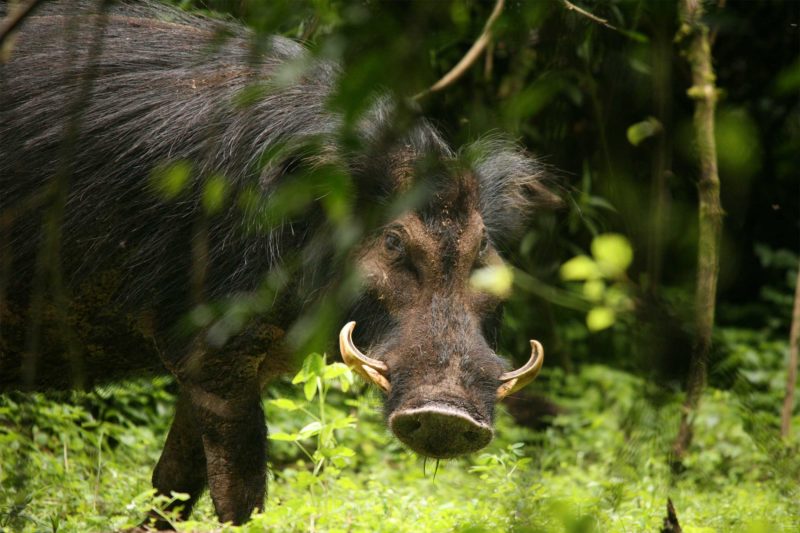 There is one animal that you couldn’t come to Ethiopia and not go in search of and that’s the Ethiopian wolf. The Ethiopian wolf is a very distinctive and beautiful wolf with a rich ginger-rufous upper coat and clean white underparts. Ethiopian Wolves’ origin in the mountains of Ethiopia had been a puzzle for scientists, but research has shown that they are most genetically similar to the European grey wolf and live in packs with a similar structure. The ancestor of Ethiopian wolves was thought to have once been widespread over much of Africa, but the Ethiopian wolves of today are only at home in rodent rich uplands where they have evolved to specialize in hunting giant mole rats and other rat species. Although they live as a pack, the wolves split up each morning to hunt individually during the day, conveniently making them easier to find as they stalk the open moorlands with little cover. 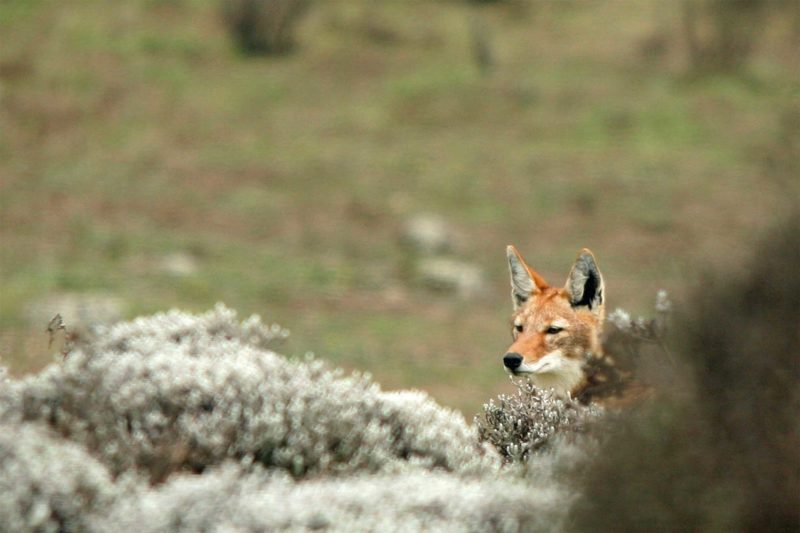 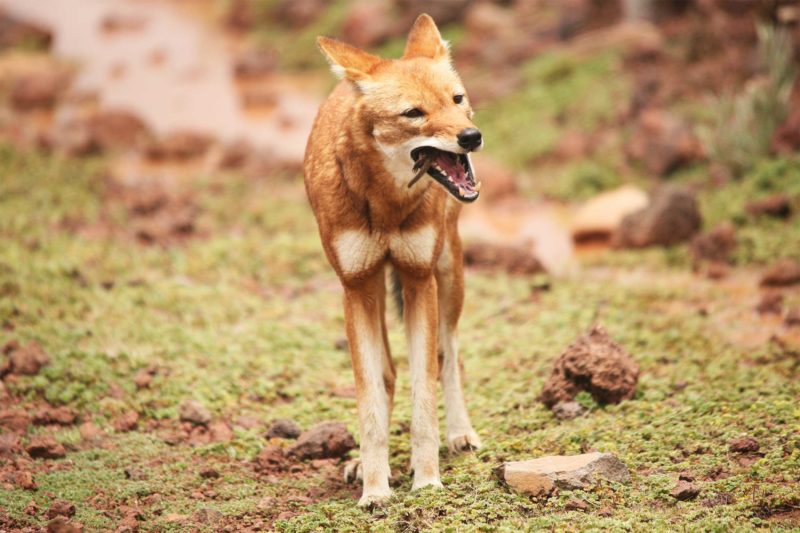 The best way to find Ethiopian wolves is to concentrate your search on the most rodent rich areas of the plateau which tend to have less tussocky vegetation and more short grass swards. The Ethiopian wolf is currently the world’s rarest canid with a population that could number fewer than 400 individuals and they are Africa’s rarest carnivore. Threatened by invasive diseases spread by domestic animals as well as habitat loss and hunting, the survival of this species is critical and there has never been a better time to travel to Ethiopia to see this wonderful animal in the wild and support its conservation through ecotourism. 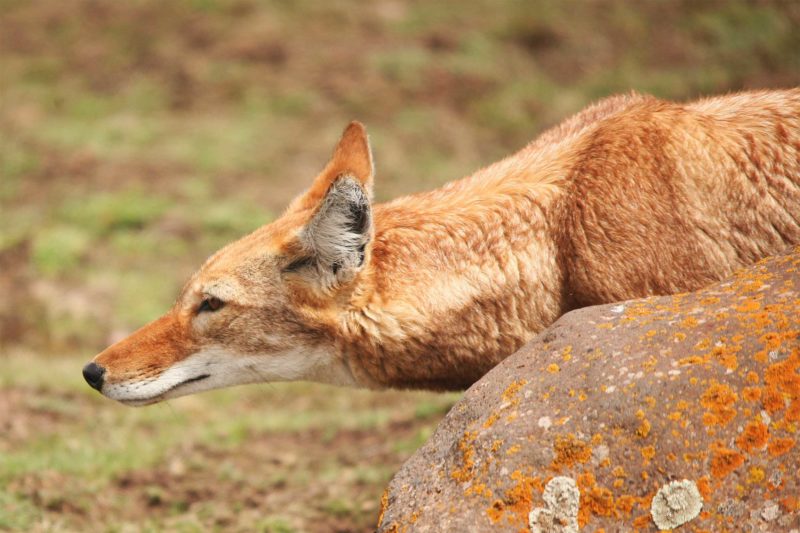 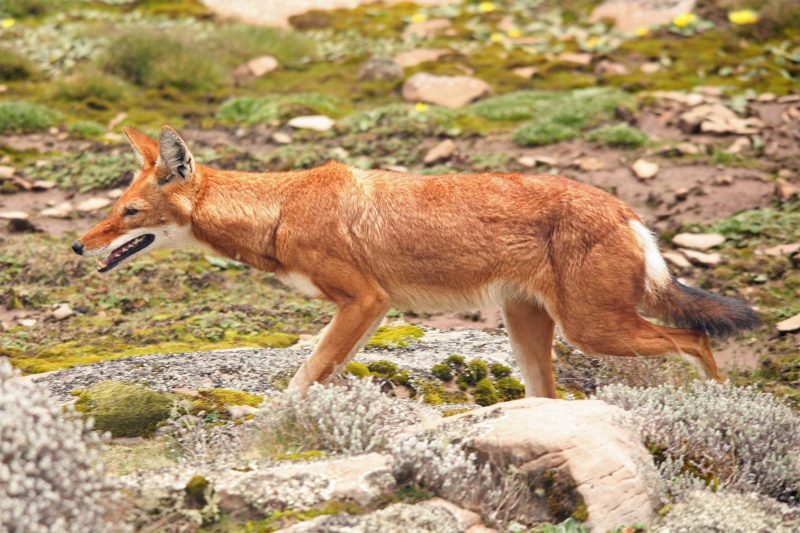 During my trip we were lucky enough to have 17 different sightings of the wolves, but my most memorable encounter with an Ethiopian wolf came by surprise and was particularly intimate. It came just after lunch while I was trying to get a closer view of a giant mole rat by creeping closer to watch it while it was hidden underground in its burrow. I then sat a distance away and waited for it to emerge again, which it did without noticing me and providing an excellent view. But a few minutes later just as I was about to leave an Ethiopian wolf appeared on the scene. It started by sniffing several mole rat burrows in the area, but then spotted the mole rat feeding unconcernedly just a few meters in front of me and began stalking. I did my best to remain completely motionless so that I did not have any impact on the outcome of this hunt unfolding in front of me, although it was very hard to supress my excitement. Soon this elegant Ethiopian wolf was only a few metres away and within pouncing distance of the giant mole rat, but at the last second before the pounce, the rat noticed or smelt the wolf and dashed for cover.

The now slightly deflated Ethiopian wolf went to check the burrow but soon realised it was game over and went on its way, but I was left with a huge smile and an unforgettable memory. 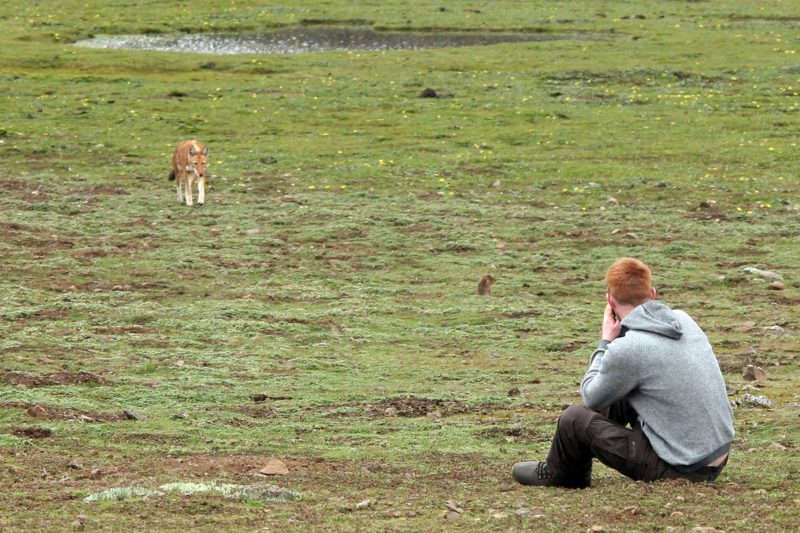 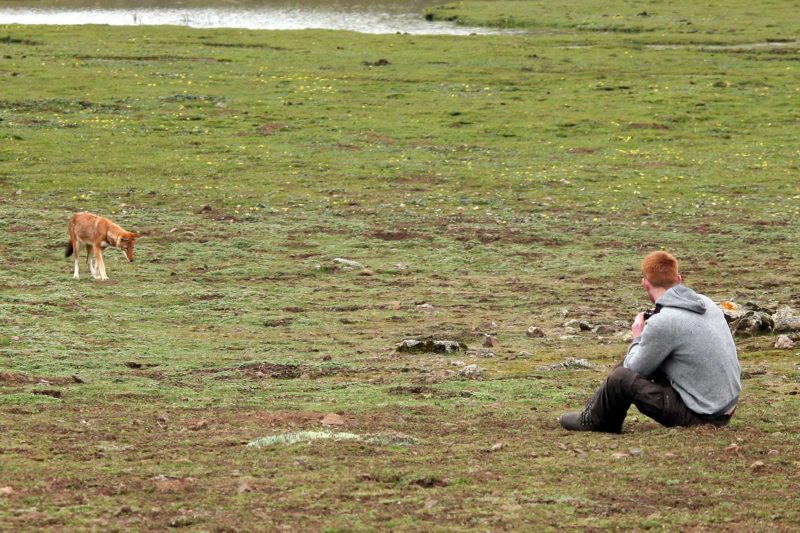 My final location was some of the lakes of the Great Rift Valley, namely Lake Langano, Lake Awassa and Abijatta-Shalla National Park. Here it again felt like I was within a more typical African landscape with some fantastic hippo watching but the birdlife was particularly sensational. When close to the waters edge and in more mature woodland it felt as though there was either hornbill, go-away bird, barbet, woodpecker, fiscal shrike or wood-hoopoe around every corner. 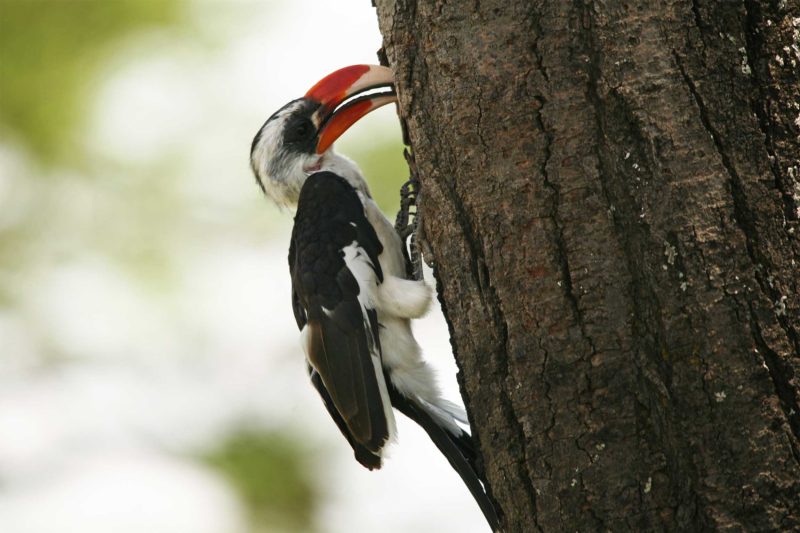 Although the diversity of birds was fantastic with some real specialties to see including endemic Ethiopian bee-eaters, yellow-fronted parrots, red-throated wryneck, spotted creeper and Abyssinian ground hornbills it was the sheer abundance of birds that was so heartwarming. As there is very little hunting of birds in Ethiopia, many species are also remarkably bold and unafraid of people, allowing great sightings too.

With such a diverse range of environments, unique and unusual wildlife as well as impressive historical and cultural attractions, Ethiopia really has so much to offer and is the perfect destination for those looking for a different type of African holiday.

Highlights of Ethiopia in Comfort

A well paced and comfortable itinerary designed to showcase the top wildlife and historical highlights of Ethiopia.

The Wildlife and Cultural Highlights of Ethiopia

Highlights of Ethiopia in Comfort

The Photogenic Wildlife of Ethiopia – With Oliver Smart