Kanha, the setting for The Jungle Book by Rudyard Kipling, is noted for the last remaining population of the hard-ground race of the swamp deer, known as the barasingha. Once there were only 66 of these in the national park, but careful conservation and management raised their population to over 400. Kanha is very rich in other wildlife including healthy numbers of tiger, often seen during the day. There are also herds of spotted deer as well as the timorous barking deer. It was in Kanha National Park that the eminent zoologist George Schaller studied the relationship between predators and prey, resulting in his book Deer and The Tiger. Kanha has two main rivers: Halon in the east and Banjar in the west, and grassy maidans (often old village sites) dotted with clumps of forest harbouring large numbers of herbivores. The hills offer support to sizeable plateaus (locally called dadars) characterized by extensive grasslands and scant trees and much favoured by gaur (Indian bison) and four-horned antelope. 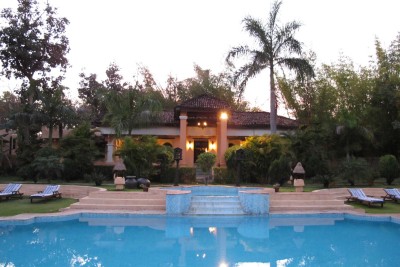