One of the most famous and weirdest of all Madagascar’s species is well known for both its extraordinary appearance, unusual woodpecker like feeding behaviour and its almost mythical presence in the forests of Madagascar. The aye aye was even described by Gerald Durrell as resembling a Walt Disney witch’s black cat with a touch of ET thrown in for good measure. It’s actually the largest nocturnal species of lemur and one that has incredibly evolved echolocation to find its food (beetle larvae grubs) hidden within the bark of the tree. 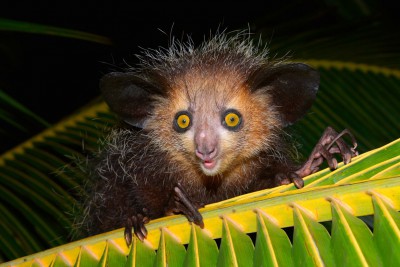 Due to a lack of knowledge of its behavior in the wild, its nocturnal activity and rarity, the aye aye has remained one of the most difficult of all the lemurs to see in the wild. However due to recent improvements in infrastructure and accommodations there are now a few locations where sightings of truly wild aye ayes are very likely.

The Farankaraina Forestry Reserve on the Bay of Antongil, near Maroantsetra has long been known for its particularly high aye aye population. Reached by boat via a branch of the Antainambalana River from the town of Maroantsetra, followed by an hour’s walk through the forest, this is a relatively unexplored area that perhaps offers the best chance in all of Madagascar to see truly wild aye ayes. Recently basic reserve bungalows have become available which enables prolonged night walks in the reserve and greatly increase the chances of encountering aye ayes.

Expert local guides here know the favoured trees used by individual aye ayes and will recommend a particular fruiting tree to wait under each evening for visitors, based on recent activity and signs. The chances of seeing aye ayes are excellent throughout the year, but between mid-August and mid-October an endemic species of Canarium tree in the forest will be in fruit which attracts aye ayes most nights so the chances can be as high as 80% per night at this time. However factors such as weather can limit the quantity and quality of sightings.

Ian Loyd recently visited this Reserve in his quest to see this elusive species and gives a short report below;

“After setting off from the bungalows my guide and I headed deeper into the rainforest to a tree, we had recced out earlier in the day as it was showing clear signs of recent aye aye activity. During the Malagasy winter months, ayes ayes feed on favoured trees that support large numbers of beetle larvae and their evidence can usually be clearly seen from numerous scratches and bite marks that criss cross the bark of the tree.

We reached the chosen tree and positioned ourselves underneath on some suprisingly comfortable boulders, turned off our tourches and began to wait in the dark. It was actually a wonderful experience, just silently waiting in the forest at night, with all the sounds and smells around us. There was an almost constant background chorus from dozens of chirping boophis frogs and every so often we would see a firefly pass through the clearing. After a little while we started to hear a larger animal approaching in the canopy and the anticipation and excitment grew as we waited for it to get closer. When we thought it right above us and with my heart beating fast, we switched the torch on to see if we could spot it. Incredibly we picked the exact branch we had last the noise coming from in the dark and there curiously staring back at us was a wonderful aye aye! 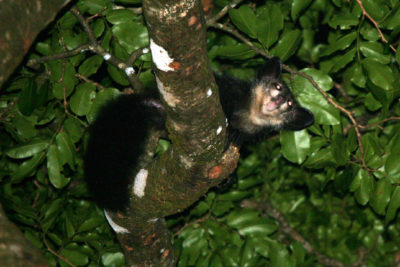 In order to minimise disturbance and enable it to continue feeding naturally, we only switched the torch on for short periods at a time, but this was still enough to enjoy an unforgettable sighting and witness its unique feeding behaviour. We could heard it tapping away at the branches with its witch like finger and then start knawing away with its powerful teeth. On one occassion it was possible to see through it licking the grubs it had just prized from beneath the bark off of its exceptional finger.”

The Masoala Peninsula supports the largest remaining area of intact lowland rainforest in Madagascar. Its geographical location and separation from other forest areas has also resulted in many species being restricted to just this peninsula such as the red ruffed lemur and Masoala woolly lemur. The forest here is also thought to support a very high density of aye ayes. However due to most areas being inaccessible at night sightings of aye aye here have previously been scarce and infrequent. However recently the wonderful  Masoala Forest Lodge has recently been having regular sightings within the private forest reserve, next to the lodge. New for this year, the lodge has also employed a dedicated aye aye tracker to keep track of aye aye movements and locate feeding and roosting trees in the reserve to offer guests the best chance of seeing this marvellous creature. Besides other nocturnal lemurs, the rare fanaloka (Malagasy striped civet), lowland streaked tenrec and ring tailed mongoose are also often spotted in this reserve.

Another famous location to see aye ayes, but in a more managed setting is Ile mon Désir also known as Roger’s or Aye-aye Island near Mananara where several ayes ayes have been introduced. Most evenings one or more can be seen visiting dedicated fruit feeders. The animals here are free ranging but restricted to the fairly small island.

In the far north of the country, the conservation organization Fanamby protects an area of forest called Loky Manambato, close to the village of Daraina. The dry forests here are one of the last refuges of the critically endangered golden crowned sifaka, but there is also an important aye aye population here. With a little more time and luck ayes ayes can also be seen in the forests here at night. Due to the lower and and more open canopy here compared to the rainforests found further east, the views of ayes ayes can sometimes be a little better.

Believed by many Malagasy to be an ill omen and harbinger of death, the wonderful aye-aye is sadly still heavily persecuted in many parts of its range, while habitat destruction also remains a serious threat. With the increase in tourism and education, it is hoped that fewer of these exceptional and harmless lemurs, which occupy their own one-species family, will suffer such a fate. Many of the locations mentioned above could benefit from much needed wildlife tourism, showing local villagers the financial benefit of protecting these valuable forests and their ayes ayes as an alternative to slash and burn agriculture.

If you would be interested in your own adventure in search of aye ayes please ask us for more details on 01803 866965 or email Ian Loyd at ian@reefandrainforest.co.uk

Best of Northern Madagascar and Andasibe